Plan of 200 massive houses among requests filed this week

A massive plan of 200 housing units is part of the planning requests that have been submitted this week.

Elsewhere, the developer of an 81-unit plan for the Palm Hills estate has asked for adjustments to the program.

There is also a project to build 18 houses at Winkfield Manor in Ascot, and flashy new designs have been revealed for a historic pub in Wokingham.

READ MORE: The blueprint for Bracknell’s future could have been torpedoed

To view each plan in detail in Bracknell Forest, enter the planning reference in parentheses in the search bar of the Borough Planning Portal here: https://planapp.bracknell-forest.gov.uk/online- applications /.

From here you can also see a list of validated and decided applications each week.

To view plans in Wokingham, visit the Borough Council Planning Portal: https://planning.wokingham.gov.uk/FastWebPL/welcome.asp. You can use this link to see a list of requests filed and submitted during the week.

A first sketch of what the development of 200 houses in Twyford will look like. Credit: Maisons Croudace

An extensive plan of 200 houses has been submitted for land at Bridge Farm in Twyford.

The project would see homes built around the existing Orchard House, which was built to replace Bridge Farm and will be retained.

Meanwhile, six important farm buildings would be demolished and houses built on the farmland itself.

The site is bounded by the Loddon River to the west.

READ MORE: Over 80 new homes could be built on Winnersh farmland

Developers Croudace Homes are seeking approval of the outline of the plan, with all matters reserved except for access to the site, which will take the form of a roundabout from New Bath Road.

The rest of the details will be submitted to the board at a later date, if Croudace Homes receives approval of the plan.

The council’s public consultation on the plan will run until September 16. You can see more photos of the plan in the gallery above.

The developers asked to demolish the buildings at Winkfield Manor and replace them with 18 houses.

The houses of the manor are currently deserted. The mansion was damaged by fire in April last year, with Thames Valley police suspecting arson.

The adjoining cottages on the land were also deemed uninhabitable, but there is also a modern apartment building on the site.

The proposals involve the construction of a replacement mansion, a caretaker’s house, two “stable blocks” of houses and a “new barn”.

You can see more photos of the plan in the gallery above.

Here, the developers of the Palm Hills Estate have submitted more detailed designs of what they will be doing during development.

The plans for 81 homes on the Palm Hills estate were appealed following a July 12 public inquiry.

READ MORE: Coopers Hill will be demolished to make way for 52 houses

Now the developers have submitted the details of the hard and soft landscaping as they prepare to act on the approved plan.

Flashy designs for a historic pub in Wokingham (Wokingham app 212857) 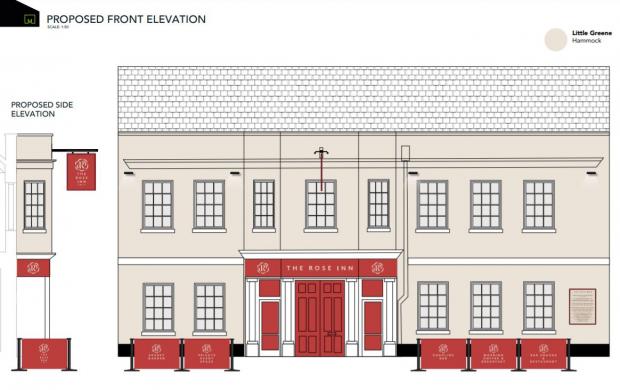 What The Rose Inn will look like once opened. Credit: Morgan Style and design

The historic Rose Inn pub in Wokingham is gearing up to open and as such designs of what it will look like have been submitted.

The pub is about to open in early October.

The Oakman Inns owners have submitted detailed plans for The Rose, as it is a Grade II listed building.

It served as Café Rouge until the restaurant chain pulled out of town in 2018.

You can see more photos of the plan in the gallery above.