A standing ovation filled the auditorium as the cast of Blood Brothers bowed on their successful opening night.

Originally written by Willy Russell, this musical sensation has hit the West End, Broadway and toured across the UK and overseas.

Currently playing at the Theater Royal Windsor, the story follows Liverpool’s mother, Mrs Johnstone, who struggles to pay the bills after her husband leaves.

Pregnant with twins, she agrees to give one to a wealthy family she cleans, the Lyons.

Raised in different homes completely unaware that they are related, the mothers do everything in their power to separate Mickey and Eddie.

Her voice is unmistakable and her performance is so authentic, it’s hard not to shed a tear as she sings her solo songs, including the iconic “Tell Me It’s Not True.”

And Sean Jones, returning to the role of Mickey, portrays the character perfectly as he grows throughout the play.

Her onstage relationship with Joel Benedict, playing Eddie, is truthful and they show a great connection with each other. 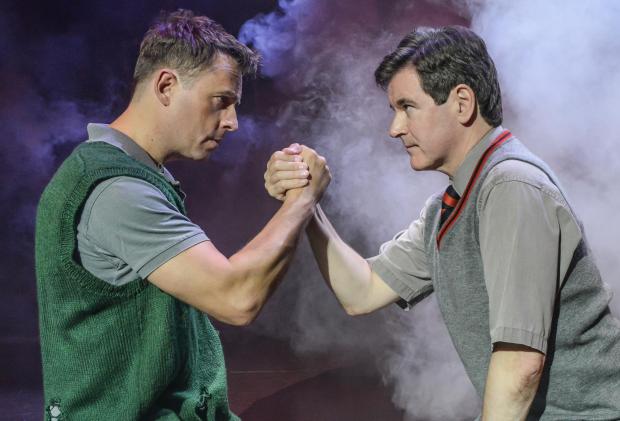 It would have been great to have The Narrator, played by Robbie Scotcher, having a more distinct character as there was clearly more underlying meaning to him.

That being said, her strong voice carried throughout the show.

And credit also goes to Daniel Taylor for his amazing performance as Sammy.

Taylor has perfectly captured Sammy’s rude and disturbing character traits and his dedication to the role is most impressive.

Directors Bob Tomson and Bill Kenwright do a great job of using the cast to their full potential in scenes where most of the characters are on stage.

There could have been more use of stage directions in the smaller scenes, especially those with just Mrs. Johnstone and Mrs. Lyons, played by Paula Tappenden.

Despite these very minor points, overall the entire cast is exceptional from start to finish, their energy on stage is electric and that’s definitely one to watch.

This heartfelt masterpiece is the perfect balance of comedy mixed with grim and emotional moments.

No matter how many times he comes back on tour, he always brings the audience to tears.

This latest tour is a real treat to start 2022 and the audience clearly loved it.

The production runs until Saturday, January 29 before heading to its next location.