The latest planning news from Bracknell and Wokingham this week

A series of planning requests in the Bracknell and Wokingham areas were submitted and decided this week.

Bracknell Forestry Council The planning committee met with reduced capacity to decide on three plans, the most important of which was to allow an American television studio to film a World War II drama in Swinley Forest.

The meeting was held in person in the boardroom on Thursday, July 2.

Although the committee typically has 18 members, a small committee of five met to decide on the plans, which had already been discussed in a consultative meeting on Thursday, June 17.

Elsewhere, public consultation has started on a plan to build 54 housing units on land south-east of Wokingham.

You can see the applications decided and validated this week below:

An American television studio has been granted permission to film a World War II drama in Swinley Forest.

The film company will use the forest as a makeshift camp for prisoners of war.

A total of 15 temporary huts will be built in the forest for the filming, 13 of which will be contained in a temporary fence.

The television studio is allowed to use the land for 12 months, with the shooting itself scheduled to take place over four weeks.

Activists opposed the plan, arguing the filming would have a significant impact on the Green Belt.

The land must be returned to its original condition after filming is completed. You can find out more here. 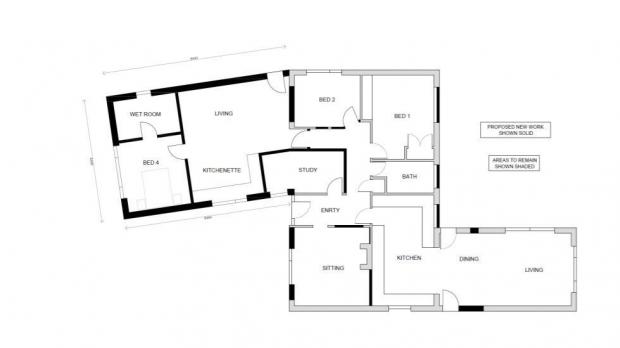 The plan for a one-story extension at Kenrick, Chavey Down Road, Winkfield Row. Credit: Lascelles Design

The owners of the Kenrick bungalow at Chavey Down Road, Winkfield Row, failed in their attempt to build an annex for a disabled family member.

The annex would have provided a bedroom, a living room, a kitchenette and a bathroom for the new occupant.

However, the planning committee rejected the plan on the basis of its size. Cllr Moira Gaw, who virtually joined the meeting, said council policy is that “front extensions should have a small footprint relative to the local building”.

Cllr Tony Virgo said the expansion represented a 50% increase in Kenrick’s footprint, implying that he didn’t think the expansion was “subordinate.”

READ MORE: TRIPLE coronavirus case in one month in Bracknell

Here, the applicants wanted to use a prefabricated garden building to be used as a place for music education and for the general use of the applicants.

Planning officer Olivia Jones told the committee that the building had been constructed but music lessons were not taking place.

Classes were reportedly given in 45-minute sessions during the week.

Although council planners recommended that the plan be approved, it was unanimously rejected by the committee due to fears over increased traffic and the “inequitable” nature of the development.

For more details on the plans within Bracknell Forest, enter the planning reference at https://planapp.bracknell-forest.gov.uk/online-applications/.

Public consultation has started on a plan to build 54 houses on land to the west of St Anne’s Manor Hotel in Wokingham.

The land is located west of St Annes Drive and south of London Road, on the south-eastern outskirts of the city.

The consultation will run until Tuesday, July 20.

The plan was validated in December last year and now a public consultation is due to take place before the plan is forwarded to the Wokingham Borough Council planning committee.

Here, the developers have submitted variations and more information for a 52-house development in Newell Green, Warfield.

Other details relate to a drainage plan for the site and variations in landscaping.

The original plan for the 52 homes on the land south of Fairclough Farm was approved in August 2018.

Kennel Lane School has requested the construction of a new Multi-Use Playground (MUGA).

MUGA designers Atkins Ltd have submitted detailed plans for how water will be drained from the land by astroturf and a flood risk assessment, as the school is near The Cut, a tributary of the Thames.

The astroturf ground would be built on a concrete playground.

A taxi company has requested to set up its offices in the former stately home of Wyvols Court in Swallowfield.

The taxi company plans to move into suite 11 of the Wyvols court. The unit would only be used for administrative purposes, with no taxis parked at Wyvols Court.

Plaintiffs said drivers should drop off documents and bills at the office on occasion.

Wyvols’ courtyard was once a stately home, but was converted into offices in 2015. The courtyard now serves as the Citibase Reading business center.

The building is Basingstoke Road is Grade II listed.

Bray: one of the “most beautiful villages” ...

England fans are euphoric as the Three ...